Extreme reliability in a compact design

TP-Products’ expertise in “NORSOK type” Compact Flanges is unique. TP has produced this type of compact flange since 1989. Our engineers have long experience in the design and development of compact flanges and were responsible for writing the product standard in NORSOK L-005 and have also participated in the ISO 27509 compact flange standardisation work.

The TPC Compact flange is smaller, lighter and tighter comparing with ASME or API flanges. Due to the inhouse knowledge of compact flanges we are able to design compact flanges with wall thicknesses outside the range given in the standard and do we have swivel flanges in our portfolio. We can also deliver tailor made compact flanges designed for your load case with both IX or HX seal ring solution

The key functional property of the TPC Compact Flange, is that it is a static connection which means that there is no relative movement between the two flange halves when in service. Due to this static condition, a leak cannot develop over time. The static behaviour also makes the flange 100% maintenance free.

The high reliability of TPC Compact Flanges allows for the use of mechanical connections in restricted areas. The use of flanged connections instead of welds, for instance towards equipment, makes maintenance and replacement a lot easier, faster and cheaper.

Compact flanges use self-energised and pressure assisted seals; the performance of such seal rings is dependent on using materials of high quality and strength.

The key functional property of the TPC Compact Flange, is that it is a static connection which means that there is no relative movement between the two flange halves when in service. Due to the static condition, a leak cannot develop over time. The static behaviour also makes the flange 100% maintenance free.

The flange face includes a slightly convex bevel with the highest point, called the heel, adjacent to the bore and a small outer wedge around the outer diameter of the flange. The NCF5 is made up by tightening/tensioning the flange bolting which pulls the two connector halves together.

For the seal ring, axial forces are exerted on the taper of the metal seal ring and translated into a sealing force. Furthermore with increased pre-load, the bevel is closed and face to face contact is achieved at the outer wedge while most of the bolt pre-load is transferred as compressive forces between the flange faces at the heel.

The principle design of the flange face includes two independent seals. The first seal is created by application of seal seating stress at the flange heel. The flange also remains in contact along its outer circumference at the flange faces for all allowable load levels. The main seal is the seal ring. The seal ring force is provided by the elastic stored energy in the stressed seal ring. Any heel leakage will give internal pressure acting on the seal ring inside intensifying the sealing action.

The design aims at preventing exposure to oxygen and other corrosive agents. This prevents corrosion of the flange faces, the stressed length of the bolts and the seal ring.

The back face of the flange in the made-up position is parallel to the flange face in order to prevent bending of the bolts in the assembled condition. 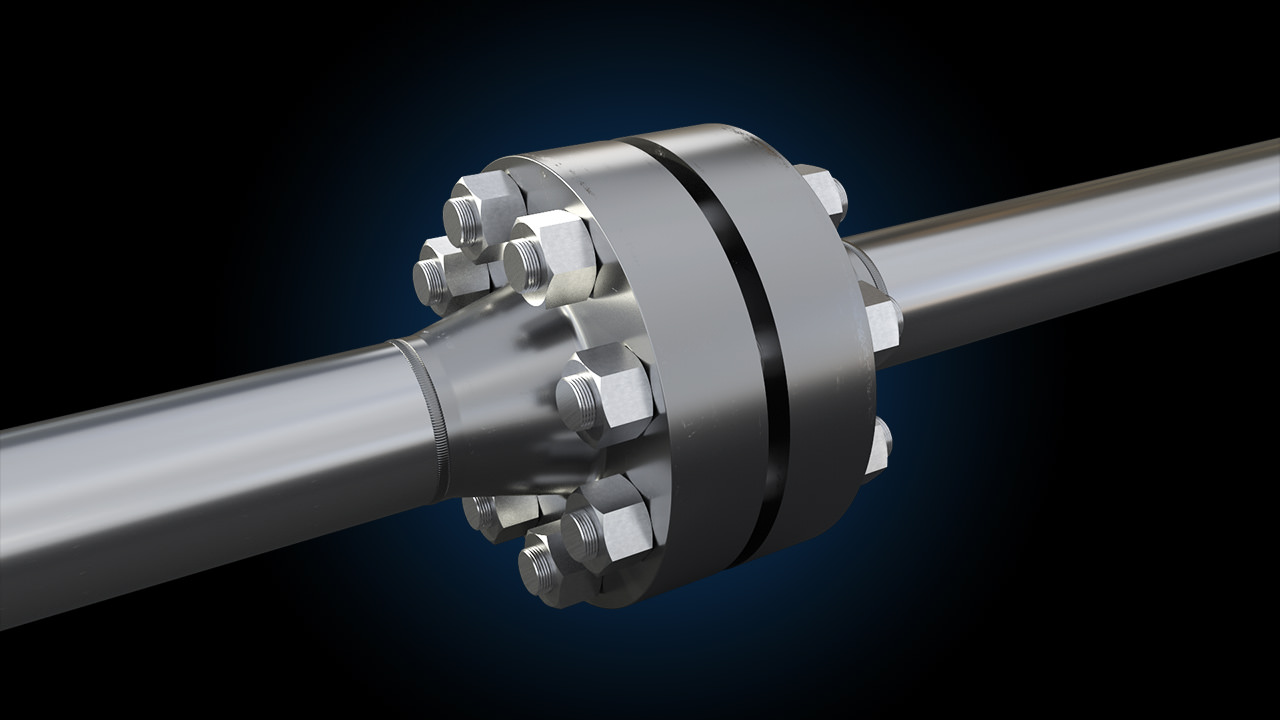 TP-Products produces high quality metal seal rings for compact flanges. The seals available are of type IX for standard process piping applications and  type HX for subsea applications and other demanding applications such as extreme temperature. The seal type for compact flanges are self-energised and pressure assisted; the performance of such seal rings is dependent on using materials of high quality and strength. The deformation controlled functionality demands that strict dimensional tolerances are met, something our machine shop has 25 years of experience in achieving.

The seal rings are available with coatings selected to suit the functionality of sealing for compact flanges. For subsea use, we will recommend our silver coated seals which is a very robust solution giving an extremely good and everlasting sealing performance. For topside applications, we recommend using MoS2 based dry film coatings. The seal rings used in TPC Compact Flanges are designed to be high reliability metal to metal seals and the use of PTFE type coatings is not recommended.

Applications for the TPC Compact Flange

Due to the static behaviour of «NORSOK type» compact flanges and the high reliability, the TPC Compact Flange can be used in critical dynamic applications such as in dynamic offshore riser systems. The static condition also give very good fatigue resistance which will always make the flange better than the adjoining weld. TPC Compact Flanges are superior to other connectors also in extreme low temperatures and in extreme high temperatures.

Due to the flange’s compact design with low weight and small diameter, module and skid designers can design more compact modules/skids which is beneficial in many ways. One important example is offshore lifting of modules either to a platform or to a subsea location, where weight and space is crucial to keep installation cost down.

AND THE IMPORTANCE OF A STATIC CONNECTION

IMPACT OF FORCES ON ASME FLANGE

IMPACT OF FORCES ON TPC CF

TP-Products can supply tailor made compact flange designs for a wide range of applications outside the area of NORSOK L-005 / ISO27509 flanges. This includes first of all subsea applications, but also for use in high pressure, high temperature systems designed to API 17 TR8.

Compact flange designs can be supplied to meet the client’s special requirements in terms of space and weight limitations, load carrying capacity for static and dynamic loads as well as for special installation requirements, such as in diver assisted assemblies.

Flanges suitable for “spec brake” locations are available. This may be connections between two pressure classes, and or two nominal pipe sizes (enlarging and reducing flanges).

TP-Products can offer many services associated with our products. For equipment manufacturers who will produce their equipment with an end connection of either compact flange or clamp connector type, TP-Products can supply machining drawings as well as calculations including non-linear Finite Element Analysis to specified codes and standards.

Our experienced engineering team can assist in finding the best technical solution for a certain application and together with pricing and delivery information guide the client to the best total solution.

In our test facilities we can perform the required pressure testing of any pressure components we deliver.

Other services we offer include training in assembly of compact flanges and clamp connectors and also on-site supervision.

The engineering team at TP-Products has long experience in design and development of pipe connectors for different applications. Our technical manager, Sjur Lassesen, joined SteelProducts Offshore (SPO) in 1998 and has since then headed the development of the compact flange concept into what it is today, a versatile and unique high integrity, high capacity connector with a reliability no other pipe connector can give.

Flanges and connectors for subsea use and made from duplex materials, will be designed to meet DNV-RP-F112 to show required HISC resistance.